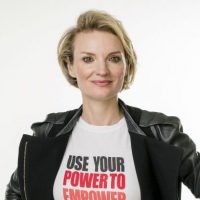 Alyse Nelson is president and CEO of Vital Voices Global Partnership. A cofounder of Vital Voices, Alyse has worked for the organization for over 20 years, serving as vice president and senior director of programs before assuming her current role in 2009. Under her leadership, Vital Voices has expanded its reach to serve over 18,000 women leaders across 182 countries.

Previously, Alyse served as deputy director of the State Department’s Vital Voices Global Democracy Initiative and worked with the President’s Interagency Council on Women at the White House. Alyse is a Member on the Council on Foreign Relations, and serves as a Board Member of Running Start, RAD-AID and Black Trans Femmes in the Arts Collective.

Alyse is on the Advisory Board of Chime for Change and Global Citizen. Newsweek Magazine named Alyse one of the 150 Women Shaking the World, Fortune Magazine featured her as one of the 55 Most Influential Women on Twitter and Apolitical named her as one of the 100 Most Influential People in Global Gender Policy. Her work has been honored with awards such as the Tribeca Disruptive Innovation Award and Foreign Policy’s Citizen Diplomat of the Year Award.  She has also been featured in international and national media, including the Washington Post, Financial Times, the Miami Herald, the Wall Street Journal, USA Today and Reuters, and has appeared on BBC, PBS, CNN, NPR, FOX News, and CNBC. She completed her graduate degree work at the Fletcher School of Law and Diplomacy at Tufts University. In 2006 Alyse was named one of ”Ten Women to Watch” by Washingtonian Magazine and was honored by her alma mater, Emerson College, with the distinguished speaker award.

Alyse is the author of the best-selling book Vital Voices: The Power of Women Leading Change Around the World and editor of Vital Voices:100 Women Using Their Power to Empower. She received her MA from the Fletcher School of Law and Diplomacy at Tufts University and BA from Emerson College.