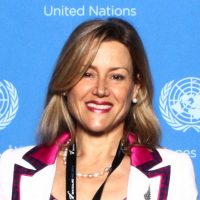 Amanda Ellis is the Executive Director, Hawaii and Asia-Pacific and Director of Strategic Partnerships for the Julie Ann Wrigley Global Institute of Sustainability at Arizona State University. She is an Adjunct Senior Fellow at the East West Center where, from 2016-2018, she served as Special Advisor for International Programs and Partnerships in the Office of the President on secondment from the New Zealand Foreign Ministry. Until March 2016 Ms. Ellis served as New Zealand’s Head of Mission and Ambassador to the United Nations in Geneva and the Prime Minister’s Special Envoy to Francophone Africa. From 2010 she was Deputy Secretary International Development and the first woman to head the New Zealand Aid Programme, managing an annual budget of over $0.6 billion. Prior to this, Ms. Ellis was Lead Specialist in the Poverty Reduction and Economic Management Group at the World Bank Group in Washington D.C., where she managed the World Bank President’s Global Private Sector CEO Leaders Forum and led the Doing Business gender research project which created “Women, Business and the Law.” While at the World Bank, she worked with the Economist Intelligence Unit to create the EIU Women’s Economic Opportunity Index. Ms. Ellis also founded the International Finance Corporation’s gender program, where she developed the first lines of credit for women entrepreneurs in Africa delivered through local banks. In the late 1990s she served in senior executive roles at Westpac Banking Corporation in Australia, including as Head of Women’s Markets and National Manager Women in Business, growing a new business rapidly to over half a billion dollars in annual revenues within just three years.

Ms. Ellis is the author of two best-selling Random House books, Women’s Business, Women’s Wealth and Woman 2 Woman and lead author of five research titles in the World Bank Directions in Development series on gender and growth in Africa, the Middle East, East Asia and the Pacific. A founding member of the Global Banking Alliance for Women, Ms. Ellis is the recipient of the TIAW Lifetime Achievement Award for services to women’s economic empowerment, the East-West Center Distinguished Alumni Award and the Columba College Distinguished Alumna Award and NZ Business Hall of Fame.

Ms. Ellis serves on the advisory boards of the UN Women’s Empowerment Principles, Hawaii Green Growth, Bishop Museum, Institute for Climate and Peace, the East-West Center Board Of Governors and the Council on Foreign Relations Advisory Committee on economic inclusion. She is a member of NZ Global Women and an honorary member of BPW International and Rotary International. Pacific Business News named Ms. Ellis one of ten ‘women to watch’ in Hawaii in 2017.

Ms. Ellis holds a BA First Class Honors degree in French and Economics from the University of Otago, New Zealand, an MA degree from the University of Hawaii at Manoa which she earned on an East-West Center scholarship, an LTCL from Trinity College of London. She has completed executive education programs at Harvard Business School and the Kennedy School of Government, the Stanford Graduate School of Business and INSEAD, and the Asia Pacific Center for Security Studies Transnational Security Course for two star generals and civilian equivalent.

The 2017 EXCELerate Conference exceeded my expectations. The plenary sessions alone were worth the fee … the level of speakers gathered— and their synergy—was absolutely brilliant. Regarding the break-out sessions: Ann Gomez’s session, ‘Focus Your Time to GroYourBiz: Personal Productivity for Busy People’, blew my socks off with its relevance and practical applications. Her book, ‘The Email Warrior’, is easy to read and the tips within it are easy to implement. Wow!