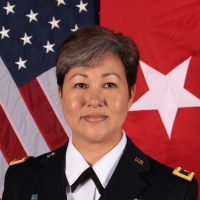 Major General (MG) Suzanne P. Vares-Lum is a U.S. Army officer transitioning to retirement.  In her most recent assignment, she served as the Mobilization Assistant to the Commander, U.S. Indo-Pacific Command (USINDOPACOM) at Camp H. M. Smith, Hawaii. In this role, MG Vares-Lum served as the Acting Deputy Commander from 27 JUL to 17 SEP 2019, and Acting Chief of Staff from 27 SEP 19 to 2 DEC 19.

She also served as the Mobilization Assistant to the J5, Director of Strategic Plans and Policy, U.S. Pacific Command from OCT 2015 to MAY 2018.

Major General Vares-Lum joined the Army Reserve as a Private First Class in 1986 and later commissioned as a Distinguished Military Graduate in the Military Intelligence Corps on May 15, 1988 through the Army ROTC program at the University of Hawaii at Manoa.

Major General Vares-Lum received a Bachelor of Arts degree in Journalism in 1989, a Master of Education in Teaching in 1996 from the University of Hawaii at Manoa, and a Master of Strategic Studies degree in 2011 from the U.S. Army War College.