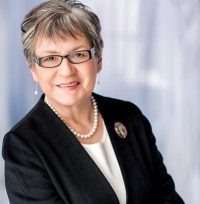 Sophie Pierre served her community of ‘Aqam (the St. Mary’s Indian Band) of the Ktunaxa Nation for 30 years, 26 as elected chief, and was the administrator of the Ktunaxa/Kinbasket Tribal Council for 25 years.  She also served as the tribal chair of the Ktunaxa Nation Council, chairperson of the First Nations Finance Authority, president of St. Eugene Mission Holdings Ltd. and co-chair of the International Advisory Committee to the Indigenous Nations Institute for Leadership, Management, and Policy for the University of Arizona. Sophie Pierre was appointed Chief Commissioner of the BC Treaty Commission from April 2009 to 2015 by agreement of the governments of Canada and British Columbia and the First Nations Summit.  She has also served on numerous boards and committees; local, regional, provincial, national and international.

Sophie was recognized with the Order of Canada in 2016.  She also received the Order of British Columbia in 2002 and the National Aboriginal Achievement Award in the business category in 2003. During her tenure as chief commissioner, Sophie Pierre was awarded two honorary Doctorates of Law—in 2010 from the University of Canada West and in 2012 from the University of British Columbia.

Sophie now spends her time as an elder advisor to her community and to the Ktunaxa Nation.

EXCELerate was Transformational. I hope that this will be an annual event as it is something I would like to mark in my calendar as the most important thing to do.